Sex Addiction vs. the Virgin Mary's Belt: If you doubt that men and women are really different... 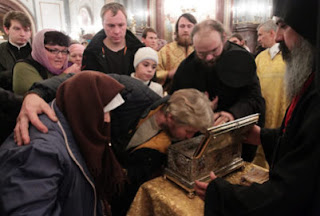 The other day my Fave Radio Host spent an hour talking about sex addiction, the cover story of Newsweek Magazine, and the subject of a movie he had to watch tonight called "Shame."  As callers spoke about the slippery slope from internet porn to action, I listened  at home while reading the newspaper--a story in the New York Times headlined "In Russian Chill, Waiting for Hours for a Touch of the Holy."  Horrible puns aside, I was struck by the accompanying photo, captioned "Day and night, tens of thousands of Russians have been lining up outside the Cathedral of Christ the Savior for a glimpse of a religious relic."  The picture showed a grand Russian cathedral, illuminated in the night, behind a crowd bundled up against the cold.  The crowd was comprised entirely of women.

All this reminded me that men's natural inclination is to the physical, while women's is to the spiritual.

On the radio show, Fave Host reported statistics that 90% of those treated for sex addiction are men.  In contrast, pilgrims viewing the Virgin Mary's belt on display in Moscow are overwhelmingly female, not only because the belt is said to help with fertility (along with all other ailments), but because women tend to have more of a spiritual affinity. A 2009 Pew poll found women in the US more religious than men on all of the six measures they queried, including certainty in belief about God, daily prayer, saying religion is important in their lives, and church attendance.  Of these, prayer is likely the best indicator, since it provides no public recognition; while 49% of men say they pray at least daily, 66% of women do.

I learned that the Cincture of the Virgin Mary is a camel's hair belt said to have been worn by Mary when she died. She soon disappeared but then re-appeared to Thomas, to whom she gave the belt.  It's been hiding out in a Greek monastery where women are forbidden, until its present tour of several Russian cities.  The Cincture attracted two million Russian faithful even before its current, last stop in Moscow--where 280,000 mostly-women per day wait an average of 24 hours outside in bitter cold to touch its glass encasement.

This, of course, is probably of far less interest--at least to men--than sex addiction, which is being considered for inclusion in the new revision of the psychological disorders bible, the DSM V.  Sex addiction is likely to be defined as a driving requirement for sex of any type that interferes with everyday activities like work.  A Time Magazine article on the topic earlier this year described programs to treat the problem, which, it noted, is poorly understood.  It suggested that physical urges like eating and sex are usually treated in a 12-Step, AA-like process, which is difficult since these natural functions, unlike drugs, cannot be completely eliminated.  I find this interesting, because it is possible to live without drugs and also without sex, but not without food...but in any case, the overwhelming majority of patients for such treatment are male.

The difference between men and women is recognized in Jewish law, where women are excused from time-bound commandments, not only because they're busy nursing or caring for children.  Tradition suggests that women, being more inherently spiritual (after all, women, like God, create life) have less need than men for connection to religion. Among "connectors" are prayer (where men are required for the prayer quorum of 10) and wearing phylacteries, physical reminders to dedicate mind and strength to godly purposes.  In traditional Judaism, synagogue service leadership goes to men not because they're superior, but actually the opposite--they are inferior in their natural religious inclination, and the camaraderie of "shul" encourages their participation.  In egalitarian synagogues, often women dominate the organization as well as its leadership.

Tonight my husband saw "Shame," the Michael Fassbender, Carrie Mulligan graphic movie about sex addiction, and I was careful to stay out of ear-shot of the room where he screened it.  I don't want those kinds of images in my mind, like many women I know.  I focused instead on the stage production we saw together tonight beforehand--Rodgers and Hammerstein's Cinderella.  I much prefer a colorful musical with the ending--the same one religion offers, actually--of "happily ever after."
Posted by Northern Light at 2:06 AM