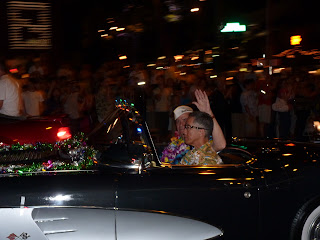 Our first day of our Hawaiian paradise working vacation happened to be Pearl Harbor Day, the 70th anniversary of the bombing of the Honolulu bay that housed the major military protection for the United States on the cusp of World War II.

So, true to custom, Honolulans threw a parade.

Several times a month, streets are cordoned off and marching bands, truck-floats and civic groups prance down Kalakaua Street.  It's a clever way to entertain tourists in Waikiki, as well as gain the business of the many high school and college bands happy to fly to paradise to participate.  Last night, the Pearl Harbor lineup included bands from Virginia, Maine, Washington state, Indiana and California--as well as a Canadian troupe of marching bagpipers.

An hour before the parade, spectators waited curbside, some with folding chairs.  A half-clothed, long-haired very tanned guy got applause blowing a conch shell, the traditional Hawaiian blast (that, for the Jews reading this, caused my husband to respond, "Ta-keee-AH!")  And finally, we could hear the first marching band, playing "God Bless America," closer and louder.

The surprise? That the parade, naturally headed by the Colors, aroused such palpable patriotism.  The crowd immediately jumped to its feet, applauding our flag, audible appreciation that increased as the Corvette Club slowly carried about 25 Pearl Harbor vets in their decorated convertibles.  Each elderly soldier, and you know they had to be at least 90 years old, was loudly and separately applauded.  When military units or Young Marines filed by, they received similar cheers.  The holiday-lit firetrucks and police also earned energetic clapping, with spectators standing to show their respect and enthusiasm.

It's true that Oahu hosts more than one military base, and that the presence of the armed services is deeply entrenched with the development of the island.  It's true that the attack on Pearl Harbor--an event one would think would be somberly remembered as a moment of weakness for our nation--has become a major tourist draw, with the memorial perhaps the most-visited site for groups (as well as a significant money-maker for the National Parks Service).  Still, I expected that the parade would be a few regiments, a couple marching bands, and lots of cars carrying local politicians. 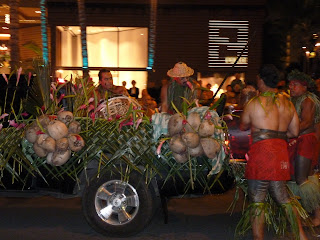 Yet it was much different. The air was festive, and at least half of the parade participants were Polynesian or represented ethnic groups.  The bands and flag-twirlers from around the country, and many Samoan-tattooed, sarong'd marchers, made this a grander celebration.  The strange combo of military patriotism and local organizations conveyed a dual message: We were attacked but we survived, and retain our local dignity--combined with--We are the United States, and yet, we are something more, an amalgam of Island traditions that don't really melt into the pot.

And yet even the Polynesians and Samoans and Fiji Islanders who marched in this parade chose to salute our military and the elderly men riding in vintage Corvette convertibles.  As we awaited the parade, my history-loving husband regaled us with the circumstances that led to the surprise attack--including the pacts made after "The War to End all Wars" for nations never to lift swords again.  As a result of this, the major military powers at the time, Britain, France and the US, destroyed many of their warships. Japan, a country we in the US considered distant, was aggressive and seized Asian neighbors, including China. As war was assembling and commencing in Europe, the US had ceased selling oil to Japan that July, and considered the possibility of attack in the Pacific--but on forces in the Philippines, not Hawaii.  So, on a relaxed Sunday morning, the buzz of aircraft and submarine attacks caught our military by surprise, and resulted in the loss of 2,400.

The attack on Pearl Harbor and 9-11 have some eerie similarities.  Both were unexpected, and both used aircraft to cause the most devastation. The USS Arizona sank along with 1,177 aboard when bombed, finished by a single lucky strike down its smokestack.  In both cases, there were mounting signs of hostility--from Japan over the previous year, and from Muslim extremists via actual attacks on US targets, and a failed Trade Center attempt, over a period of years. 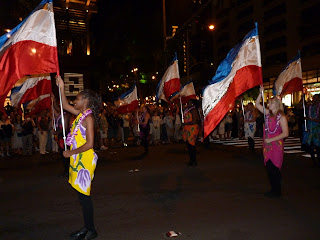 I can't fathom the mood on the cusp of World War II, but I clearly remember being shocked and puzzled about the 9-11 attacks--what had we done to deserve this? But the response of others was stronger: we must protect ourselves; we must react.

I think it's this show of strength that inspired a parade on the anniversary of so much loss. Spectators proudly sang along with marching bands' "God Bless America" and "This is My Country." They rose and applauded and hooted approval when uniformed warriors stepped by.  Seventy years may have passed, but we are not defeated, and in fact, still lead the world.  President Franklin Roosevelt dubbed Dec. 7, 1941 "a day which will live in infamy," but amid cheers of parade-goers, it was not infamy or loss that lived on, but the valor and perseverence of the national heroes that prevailed .
Posted by Northern Light at 1:36 PM