"I Swerve for Trash," Litter-ally. Or, "My Husband Uses a Grabber"

In this season when leaf-blowers blare, scooting piles of ocher maple leaves out of driveways, my anti-litter husband is ever-more vigilant in his quest for man-made debris marring our tidy town. And now the police have caught him.

He can be seen every Sabbath, walking the nearly 3 miles to our synagogue, seeking bottle-necks poking out from the thick, crisp foliage on the sidewalk. He'll trudge into a damp ditch next to the street to retrieve a carelessly-tossed Kleenex. He'll triumphantly display the shiny beer can he's clutched in his "gopher" grabber, scooped from the grassy parkway.

And, while driving in our community, he's also on the look-out for obnoxious cardboard, and fast-food wrappers tossed along the roadway. So compulsive is he about removing wayward garbage that I really must make the bumper-sticker that I've been threatening to paste on his car: "I swerve for trash."

Perhaps if the law-keeper had seen it, he might not have pounced, lights flashing, when he pulled over yesterday in a muddy narrow strip next to a tight two-lane passage. I was in the passenger seat, rolling my eyes perhaps, since my husband's many detours for toppled garage sale signs, runaway hubcaps and the like delay us whenever we go. After my husband stopped in this peculiarly-cramped spot, he leaped out of the car exclaiming, "A bottle! And a cup!"

I thought he'd said "A bottle! And a cop!" And I was right. The officer slammed his car behind us, hemming us in, because there would be no reason for anyone to pull over there--unless for nefarious purpose. When I saw the him grilling my husband, all I could do was guffaw.

After the policeman pulled away, and my husband retrieved not only the bottle and the Starbucks cup but several cigarette butts and a candy wrapper, he wryly climbed into the car...laughing.

Because after the officer ascertained that my husband was not in trouble nor planning vandalism, and he understood that the objects he was removing from his trunk were merely a plastic (recycled) supermarket bag and his gopher grabber, the response was: "Thank you."

My brilliant husband has taught me many, many things. One of them is litter awareness. I shall never walk by a discarded energy bar wrapper. While on foot, I examine my surroundings, detecting detritus partially obscured by fauna: The sparkle of aluminum foil. The glint of white notebook paper peeking from the gutter. If, while driving, I note an egregious Styrofoam carton or flyaway paper napkin, I make mental note but do not stop, since I know that after work, my husband will pass here on his way home. And swerve. 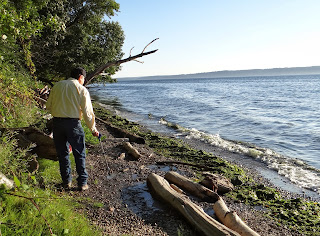 I tell you all this to ask for your help. If you're walking your dog, pick up not just his droppings but any litter you come across. If you're a jogger and see refuse in your path, take a plastic bag in your pocket, circle around and get the exercise benefit of swooping down to grab it.

Also, don't overlook the beauty in your world. Enjoy your neighborhood; enjoy the seasons, and while doing that, develop a determination that anything that detracts is an opportunity to make an improvement. Carry a plastic shopping bag you can un-wad and pop offensive litter into. Talk about litter to your kids; let them know that they can improve the environment--not by un-doing Global Warming, but by leaving the places they walk and see a bit cleaner.

This is what my husband calls "do it yourself conservatism," but I don't think that cleaning up visible garbage is "conservative" except that it conserves nature, and conserves a sense of order and calm.

One birthday, I made my husband a special present: a fluorescent orange safety vest with letters I cut out of reflective tape. Over the front chest pocket was his name. On the back, I glued, "Help me pick up litter."  I wish he'd wear it, for safety's sake, but also because perhaps it would let the people watching him with his plastic bag and grabber at the side of the road know they're empowered, too.
Posted by Northern Light at 11:56 PM 5 comments:

Labels: community, do it yourself conservatism, empowerment, litter, trash

Halloween...it's not just for Kids and Martha Stewart Anymore

Am I the only one noticing a proliferation of Halloweeniana in my neighborhood? More houses than ever before shine with strings of orange "Christmas" lights. Cottony white blobs drip from bushes; rubber spiders hang over the street from crimson maples. Plastic tombstones sprout from lawns, set off by foam cuffed arms with clutching hands reaching desperately upward.  The real arachnids of autumn are outdone by super-sized, LED-illuminated webs pasted on front doors.

The other night, I accompanied my husband as he lectured at the fund-raiser for a local politician at a lakeside mansion. The lane to the home flickered with eerie illuminaria; a large 3-D ghoul welcomed us, chalky face, long white hair and arms with skeletal bony fingers that caught the clothes of those passing within. The entry danced with the light from blinking vignettes of haunted houses, replete with flying bats, fluttering ghosts, and sound effects of screaming and slamming doors. Piles of pumpkins graced tables, some gilded, others warty, some sparkling with sequins. A metal cut-out of an arched-spined, hissing black cat stared, frozen on the fireplace mantel.
﻿
Martha Stewart has for years embraced Halloween as her opportunity for expression, and scores of other purveyors recently joined the party. Pottery Barn tells you how to throw a Halloween soiree, with a recipe for "ghoul-a-tinis," while Crate and Barrel has embraced the Day of the Dead (actually November 1) with black skull candles ($4.95 for three) and free party invitations. Annual special issues of Martha Stewart's magazine offer pumpkin-carving designs, table-scaping ideas and costume-making innovations. Pop-up stores dot malls as summer ends, offering costumes for all, from the adorable to the skanky.

Every year, my husband and I enjoy "the Great Halloween Debate" on his radio show. I'm "for" and he's "against," saying it teaches kids to beg, inspires vandalism, and turns focus to death. I counter that it's all voluntary and great fun; that costumes bring imagination and creativity, and holiday purchases fire our economy. We'll once again enter our friendly on-air spar next Thursday. Every year I win.

The National Retail Federation projects a slightly smaller turnout this year--158 million participants, down from last year's all-time high of 170 million, due to "cooler weather." But the organization expects "far from a bust" as consumers will happily part with $6.9 billion for costumes, candy and accoutrements.

I think retailers will be pleasantly surprised, judging from the way my neighborhood looked even weeks before the spooky night. Ghoulish Scrooges will simply turn off their porch lights, while the rest of us smile as children fill our doorways with their excited one-word exclamations: "Trickertreeeet!"
Posted by Northern Light at 12:50 PM 2 comments:

Rain in Seattle--Is it a Blessing?

They say there are two seasons in Seattle: August and the Rainy Season. Every outdoor scene in the 1993 film "Sleepless in Seattle" showed torrential rain.

Well, it's not like that. We're London-esque, usually living under a blanket of gray punctuated by drizzles. By spring, lichen has turned the sidewalks green and four kinds of moss drip off the trees in my backyard.

Just this week I used the kids' magnetic letters on my refrigerator to spell out "stop raining!" a wasted command, for sure. This September broke the record for most rain, 6.1 inches, compared to the usual average for that month of 1.5 inches. We bounced almost half a wet inch off our umbrellas in just the last 24 hours.

I'm a sun person; my mood is in direct proportion to the amount of bright sunshine I see. Sun is universally equated with happiness--You are my Sunshine; you're never my downpour.

But according to Jewish tradition, rain is not only a blessing, but a reward for doing what God wants. The seminal Jewish prayer, "The Shema" ("Hear O Israel...our Lord God is the One and Only") describes three types of rain as the result of diligently following the rules; those who flout them will see the heavens "restrained" and no rain will fall. Hebrew actually has at least four words for rain--geshem, which shares the same root as "gashmiut," worldly material; matar, rain, the basis for the word for umbrella; and for precipitation at different times of year, yoreh (the early rain) and malkosh (the late rain).

The more words a culture has for something, the more important it is. We in Seattle deal with quite a bit of moisture, so you'd think we'd have a plethora of rain words. Our newspapers have two: Showers (light rain) and Rain (steady to pelting rain). You will not see the word "drizzles" in our print media. No, "drizzles," in Seattle parlance, is "chance of showers." Nimbus clouds with spaces creating stops and starts of showers or rain, is called "Sunbreaks."  When the sky is a low blanket of misty drizzle that might evolve into recognizable clouds, you'll read "Chance of sunbreaks." Clouds that do not produce water are called "Sun."

Those who read the weather forecast here, a small and masochistic crew since the forecast is irrelevant to the actual weather, look for the bright side. They'll peruse the weekly lineup, see "chance of sunbreaks" four days on, and chirp, "We're supposed to get good weather on Thursday!"

There's no need to answer. These are the same folk who thought Barack Obama was going to bring Hope and Change.

This is not to complain. We do get some interesting clouds. My draperies do not fade. The
﻿﻿﻿﻿ skin cancer rate is low. Vitamin D sales are brisk. Gray goes with everything.

And we have great fun playing a cruel game with visitors, insisting there's a 14,400-foot mountain right there, that they just can't see because of the clouds. Mount Rainier is almost a religious experience: you can't see it, but you know it exists.

I should add that we just ended a most beautiful summer. July had zero rain.

I have joined the Cloud Appreciation Society, and highly recommend their gorgeous gallery of photos as a pleasurable way to spend several hours. I've learned a lot about the clouds that fill our view: Our altocumulus undulatus bring...rain.

But rain makes our lush Northwestern environment so green. How about this deal: rain at night, sun during daytime. That would please everyone.
Posted by Northern Light at 3:02 PM 1 comment: