The promise of blossoming cherry trees 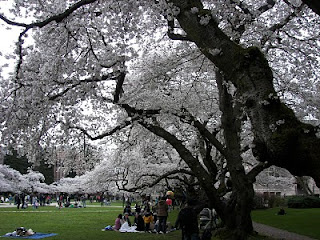 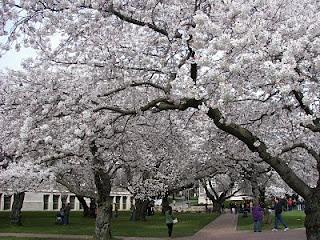 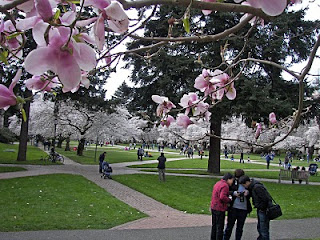 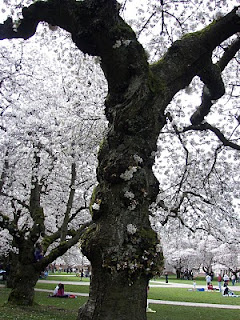 I'm not through with Israel revelations, but first this interruption for...springtime.  The cherry trees lining the quad at the University of Washington campus burst into flower for one week per year, a time that finds it crowded with picnicking families, camera-toting tourists, parents bringing adorably-clad little ones for their portraits in their Sunday best.  Being among the 30 or so old and spreading trees brings exhilaration and promise. And speaks of God's wonder--allowing these boughs to slumber and then create the billions of petals that soon drift downward like pink snow.  I took the photos above over the last week.
Posted by Northern Light at 3:51 PM 2 comments: Links to this post 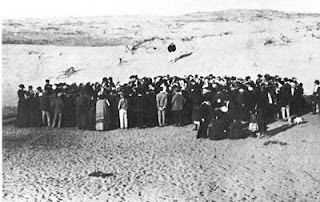 We arrived for our Israel adventure in Tel Aviv, a sophisticated metropolis of skyscrapers and international trade that burgeoned on the Mediterranean Coast from nothing in the span of exactly 100 years.  It was in 1909 that a group of six families purchased a plot of sand dunes just north of the ancient town of Yaffo, first calling it the "Housing Project" but shortly renaming it Tel Aviv, Spring Hill. 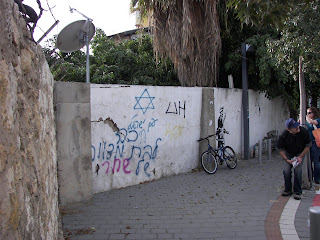 We had a lovely view from our room overlooking the coast on the 15th floor of the Dan Panorama Hotel, and when we arrived, my brother-in-law, a resident of Jerusalem, was awaiting us.  He led us on a walking tour of the neighborhood, which offered some surprises.  There was the modern skyline, curved buildings that reflected the steel-gray sea and the shape of the Bauhaus-style buildings that punctuate a town largely built up in the 1930s by German escapees.  Intersperced with modernity, however, were hovel-esque, run-down buildings, sidewalk cafes, and everywhere, blue-spray-painted graffiti of a Star of David and the Hebrew words for "The People Israel Lives."  A square framed with blossoming orange trees was immaculate.  Some street-gutters, however, were strewn with trash. 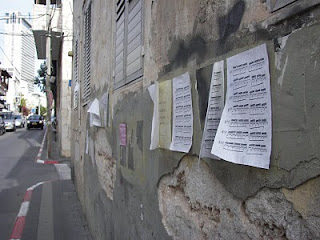 I saw picturesque peeling-paint shutters and doors, magnets for any photographer. On a stucco wall, someone had pasted up hand-notated sheet music. Streets were narrow but sub-compact cars freely parked half on the sidewalk.
We found the main drag, Diezengoff Street, named after Meir Dizengoff, city founder and mayor from 1909-1937, in whose living space Israeli independence was declared in 1948.  His thoroughfare is now a trafficky collection of tall apartment buildings, offices and street-level shops, some in need of sprucing.  That's the general impression:  The trendy alongside the frayed, the immaculate cheek-to-jowl with the ill-kempt.  Almost a passive-aggressive air, industrious urgency brushing against the cavalier. Artsy and brash at times, European with its night-clubby exclusivity and at the same time exotic.
As tourists, we strolled through the open-air marketplace adjacent to the tall hotels, inhaling the rich sweetness of freshly-plucked strawberries, observing avocados stacked points-up and bins of brightly-colored spices. Plenty, variety and possibility greeted our every glance--sugar canes, fat artichokes, bags of oranges, shiny purple eggplants, giant grapefruits, pots of cooked corn, open boxes of just-roasted cashews, stalls featuring twenty kinds of olives.
Our first day was a harbinger of the lavish complexity we discovered of Israel.  Stubbornly old-fashioned is honored and accepted as willfully as wildly innovative.  Futuristic combined with ancient.  A panoply of times, peoples and proposals.
We walked past the Bauhaus buildings the next morning to Independence Hall for a re-creation of that nation-forming day in May, 1948 when the United Nations voted in favor of the creation of Israel.  What other nation gained its land, its birth by the concensus of other countries' votes?  Israel was an aberration of history, and the crackly radio broadcast that was played for our group in which each nation's affirmation or negation of the creation of the new state provides ongoing proof that its formation grew from a democratic process, not racial aggession or a war waged by a kingdom-seeking tyrant. 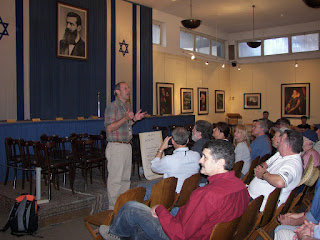 The fact that Tel Aviv is new and vibrant doesn't detract from the timelessness the sand dunes evoke.  The famous 1909 photo (top) of gathered investors surveying the dunes they'd just purchased emphasizes that the land given biblically by God to the Jews is also land with modern deeds and legal titles, developed and cultivated from scratch by people whose own determination switched dead sand into silicon and vacant swamps into the fertile orchards that now yield kiwis, mangos and persimmons; and 200 vinyards that now produce some of the most esteemed wines in the world.
A stroll in old Jaffa, just a few minutes from our hotel, however, offers less of the present and more history. Jonah's whale spit him up there and winding stone alleys of artist's studios and galleries remind that you're a tourist in a very old foreign land.
But Tel Aviv is but the first stop on our trip, and soon we board our buses heading for the north.
(all photos except the historic one are by me.)
Posted by Northern Light at 9:37 PM No comments: Links to this post

Back from Israel and ready for Shakshuka

Jet lag is still a problem, but culture-lag not so much.  Israel is a modern, hip country that happens to be set in an ancient hot-spot.  Where high tech, rock-'n-roll and skyscrapers converge, more complex and deeply-held insistences clash.  You can't compromise when you're convinced your way is God's. 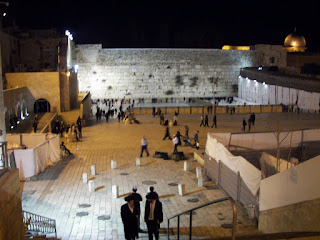 Beneath the daily commute, the entrepreneural one-upmanship documented in George Gilder's The Israel Test, and Saul Singer/Dan Senor (who addressed our group)'s Start-Up Nation is justifiable caution.  I didn't see the machine-gun-toting guards perched at the entrances of restaurants, like I observed in my most recent several visits, but still, as cars entered parking structures, trunks were inspected and auto undersides perused. When your neighbors publicly insist you need to be "driven to the sea" while, at the same time, seeking to emulate you, there's heightened awareness carrying on the interchanges and embraces commerce commands.
That was the backdrop, the meme, but not my moment-to-moment experience, which mixed immediacy and miracles, wariness and wonder.

Each of the nine days of this visit had its highlights and surprises.  I hope to write more about them later, but first, the mundane:  Shakshuka.

I first saw it at breakfast, which in Israel is the granddaddy of meals, and our hotels offered lavish buffets.  Tables of smoked fish, cheeses, fresh fruits and vegetables; baskets of baked goods, made-to-order lattes and espresso, chefs creating omelettes.  Rows of chafing dishes not only offering porridge and quiches and pancakes but on this trip, always Shakshuka.

Saute onion, garlic, fresh tomatoes and their juice with herbs, a little sugar, sometimes peppers. Let it simmer down into a dense tomato melange in the frying pan.  Then, crack whole eggs into it, cover and cook until the eggs set, nestled into the sauce.  Easy and ubiquitous.  But I wasn't ready for its popularity.

Our family came from the graveside ceremony marking a year since my father-in-law's passing.  We gathered afterwards in the private room of a quaint restaurant.  The morning had been remarkable, walking in pelting rain at the cemetery to the newly-placed monument, a beautiful orange-red marbled stone that we could could not accept covered our beloved Dad and Zayde. As soon as we arrived, the deluge, which was so strong it flooded the streets and caused small rivers gushing down the ravines, let up. Not a drop fell as we said traditional prayers, offered recollections, read psalms. When we were finished, and placed small rocks on the newly-carved slab, we turned to go--and the heavens opened again, resuming their tears and torrents.

At the restaurant, we filled our stomachs and fed our conversations on Shakshuka.  There's something earthy and elemental about this simple combination.

Every breakfast in Israel included Shakshuka.  Then, when I came home, a supplement to our newspaper happened to have a feature on it.  I opened a cookbook that I've had on my shelf for a few years, The Foods of Israel Today, by Joan Nathan, and found this version. A sensual souvenir of this particular visit to Israel; an easy way to recapture intense feelings of many types.

Yield: 6 servings
2 pounds fresh tomatoes, unpeeled and cut in quarters, or one 28-ounce can tomatoes 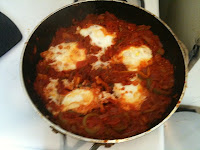 1/4 cup vegetable oil
6 large eggs
1. Place the tomatoes, garlic, salt, paprika, tomato paste, and vegetable oil in a small saucepan. Bring to a simmer and cook, uncovered, over low heat until thick, for about 30 minutes, stirring occasionally.
2. Ladle the tomato sauce into a greased 12-inch frying pan. Bring to a simmer and break the eggs over the tomatoes. Gently break the yolks with a fork. Cover and continue to cook for about 3 to 4 minutes, until the eggs are set. Bring the frying pan directly to the table. Set it on a trivet and spoon out the shakshuka.
Posted by Northern Light at 12:21 AM No comments: Links to this post