"Frozen" Wins Oscars, Captivates...Looking back on my Mixed Review 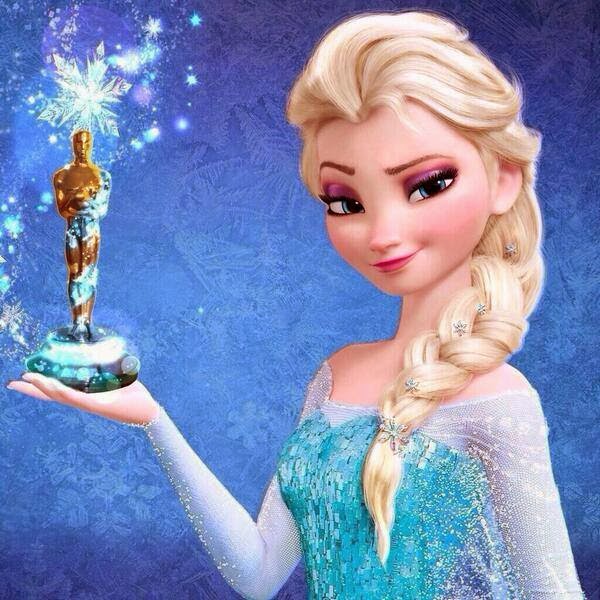 The Best Animated Picture Oscar for Disney's "Frozen" is just the sweet icing for a movie I reviewed as lightly enjoyable but bearing subtle dubious messages, a puzzling plot and some scenes too scary for little kids.

Giving the film a mixed review brought some nasty comments inconsistent with the gentle innocence one prefers to associate with "Frozen" fans. Among these are my darling neighbors and their friends, who regularly belt out the film's Best Song winner "Let It Go" together while carpooling to school. My neighbors saw "Frozen" five times and contributed to its $1 billion in sales, making it second-highest money-earner for the year behind "Iron Man 3."

Some of the comments I received on my less-than-raving review thoughtfully considered the psychological torment of a sister who completely shuts out her sibling despite continued begging for contact. Others thought I was slime for daring to question any aspect of a film they adore. "Frozen"'s popularity might simply convey that even with a weird plot and scary scenes, girls crave imaginative films that create bonds with their friends.

When my neighbors sing "Let it Go," they don't notice the perplexing message underlying Elsa unleashing her dangerous ice-creation powers--but it's still there. When someone has a destructive or harmful proclivity, is it really better to "let it go," or harness and redirect it? Elsa's exuberant expression of her freezing curse could spur viewers' "letting go" other destructive urges, like anger. It's doubtful kids understand a "soul spiraling in frozen fractals" but when it comes to tantrums, they might readily hear "Turn away and slam the door! I don't care what they're going to say--Let the storm rage on!"

But who's thinking about that? Caring parents, perhaps?

John Travolta's embarrassing botched introduction of Idina Menzel at the Oscars before she sang "Let It Go" is probably the most savored storm since the film's release. Clearly unnerved, Travolta called the Broadway star "the wick-ed-ly talented, one and only Adele Dazeem," unleashing a flurry of hilarious tweets that finally let adults squeeze some fun out of the film. Even folks who avoided the Academy Awards are chuckling from the ubiquitous loop online of Travolta's fail.

Though "Frozen" has its own fails, clearly the movie-going public disagreed with my take on it, or chose to ignore anything deeper than that first soft layer in the snow-pack. Better for families to go to Disney movies, and girls to giggle together munching popcorn in theaters than withdraw to the increasingly common physical isolation of video games and online relationships. I was surprised to see one of my "Frozen"-boosting neighbors engaged in a computer game where teen avatars are manipulated within a room by youngsters scattered around the world. These characters have fake money to spend on beauty products and clothes, certainly legitimate interests of 12-year-olds, but the platform on which they interact is pitifully disconnected from any real contact.

Theater movies provide an event, a shared experience that in themselves have value for participants. Beyond that, though, messages conveyed onscreen do matter. "Frozen" offers good ones with the dubious, such as younger Princess Anna's loyalty to her sister despite repeated spurning, and Queen Elsa's misguided withdrawal from Anna under the guise of dutiful obedience to her deceased parents' command. In this film, messages are mixed and muddled, which probably mutes their negative impact on the girls crooning "Let It Go" in the car on their way to school.
Posted by Northern Light at 5:20 PM