Bread Flour for Profit, and the President's "War on Independence" 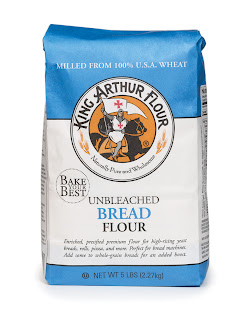 Just made my weekly challah bread for Shabbat (recipe in the previous post), and happened to see something on the King Arthur bread flour bag that excited me: "The business is based on three pillars: people, planet and profit. We do what's right for our customers, for ourselves, and for our environment..."

If I didn't have their product all over my hands, I would've run right to my computer to post my kudos that they openly state their pursuit of profit, and list "ourselves," the employee-owners, among the three "pillars" of the company.

I'm tired of the drippy altruism of most big enterprises who present themselves as solely concerned with helping their communities, the third-world workers who fabricate or grow their products, and the environment--and exclude profit as a central goal. I don't disparage the real benefits from businesses eager to be good citizens of the world, but a primary motivator of their contributions is positive public opinion that translates into more customers.

Hooray for King Arthur flour, not just because it makes my weekly challah fluffier than other brands (it does), not just because they run their company fairly, contribute to their communities and are environmentally sensitive, but because they're honest that financial success is something they seek, and their own welfare is worthy of pursuing.

With that in mind, I also applaud a very important editorial in today's Wall Street Journal, "Now He's After Your 401(k)." It's a cleverly-written expose of the real reasons Pres. Obama wants to cap the amount of money workers can save for their retirements without first being taxed for it. Here's the crux: "The Administration's political motive here is two-fold: First, it's a redistributionist play and a revenue grab. But for many on the left it's also about reducing the ability of individuals to make themselves independent of the state."

In other words, it's part of what I term "The War on Independence."  The goal of that war: Undermining personal choice and power in favor of channelling people collectively "in socially responsible ways" (by the government) to minimize human effect on the planet and "for the good of society."

Redistribution of wealth is central: Joe the Plumber made Obama slip that "when you spread the wealth around it's good for everybody." Our president has determined that about $250,000 per year is all anyone should have to live on, before exorbitant taxes kick in. He seems to think $3 million in savings should do for the years from retirement until death; anything else you sacrifice to save should have your tax bracket's percentage taken off first. Government knows best what it's "fair" to live on; individuals who worked hard and chose to prudently put aside money for retirement could have "substantially more than is needed to fund reasonable levels of retirement saving," warns the POTUS.

Similarly, policies crucial to The War on Independence seek to herd people onto mass transit, especially light rail that forces them onto fixed routes, and out of their personally-empowering automobiles.  They want to curb Second Amendment guarantees to self-protection, and make the public reliant on governmentally-funded police and military. They believe obesity can't be addressed individually (despite research that overweight and Grade I obese people live longest, as well as that obesity is often something one can't influence) and want laws that limit the size of soft drinks, or put calorie counts of restaurant food on all menus. Generals in The War on Independence prefer children eating their meals in schools, and recruit their parents to take food stamps. Even sustenance becomes less personal and more dependent on government.

Read the Wall Street Journal editorial and weep: you're losing control of your freedom. That's why we need to support businesses like King Arthur Flour who say outright that they support free enterprise and that profit is to be pursued. And we need to fight policies that thwart frugality, creativity and industriousness "for the good of society" by curtailing our personal independence in favor of government.
Posted by Northern Light at 4:24 PM