Leave it to the homeless to dampen my enthusiasm for paradise. 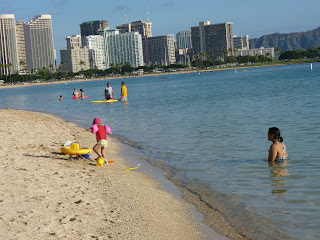 I haven't blogged in awhile as I'm in Hawaii, the best new-empty-nesters gift my husband could have given me this winter.  I'd rather have a warm downpour than a frigid one, and the overcast skies punctuated by monsoon-style cloudbursts have offered enough intermittent sunshine to allow us some beachy afternoons and great tete-a-tetes with friends to create some fabulous photos and indelible memories.
Equally memorable were the "landed-homeless" whose blue-tarp-covered heaps of possessions pock the grass-strips between sidewalk and street, even in the most touristed areas of Waikiki. Their tents pitched under banyans in parks and their groaning shopping carts draped with plastic bags stationed along sidewalks remind us that hospitable liberal government would rather enable freeloading on public property than business to high per-square-foot rent-paying establishments.

I've seen matted-haired scavengers picking through trash bins along the beach, and even right in front of Kalakaua Avenue designer shops, searching for cans to redeem for pennies.  Last night my husband and I walked by a woman settled on a store stoop who appeared in her 50's, entreating passersby for their restaurant doggie bags.  On a drive around the island, we saw a public elementary school lawn food distribution, long tables of comestibles seemingly offered to anyone approaching.

If you've gotta be homeless, Hawaii's the place.  No huddling under freeway underpasses  when you can sleep unmolested to the sound of lapping waves in a green park on the Waikiki shore.  In doorways, in front of expensive shops, you can catch your zzz's.  On last night's walk, we saw a guy lying asleep on the Kalakaua thoroughfare sidewalk. Near his extended form he'd laid out a couple necklaces, ostensibly for sale. His fingers clutched some kind of rifle, even in his sleep.  His clothes and person were dark with dirt, in contrast to the white sidewalk.  What an appealing incentive to spend big bucks in Fendi, Coach, and the other glitzy stores a few feet away.
I think it's heartless to allow pitiable people to amass mountains of stuff inches from the street, rather than placing the sad souls with mental health providers or shelters, which they obviously need.  Peeking from under their tarps were all sorts of gleaned goods, including a baby car seat. Some of the piles were ten feet high--clear evidence of the problems these vagrants face.
We've been privileged to come to Honolulu, where my husband works during our stays, many times over the years. I've never seen so many and such conspicuous homeless encampments, just plopped down in the most desirable footage on the planet.

The graffiti seems to have increased, too.  Now, I'm not complaining, as my daughter in New York is stranded by a blizzard, and our friends back in the Great North-wet shiver under continuing wintry storms.  But you'd think that Hawaii would want to rely on more than just the weather to entice visitors. Their "shaka" attitude of casualness goes a little too far when tourists are forced to step around some pretty disgusting inhabitants, and doesn't serve those individuals or their neighbors at all.
Posted by Northern Light at 3:13 PM