The Real Source of California's Hostility over Proposition 8 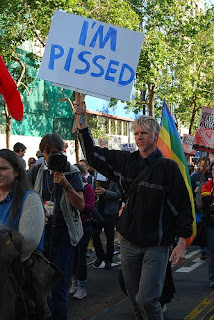 I'm extremely interested in the news surrounding the California Supreme Court's upholding Proposition 8, defining marriage in that state's constitution as one man, one woman. I keep hearing the initiative mislabeled as a "gay marriage ban" (gay marriage is not addressed; rather the traditional definition, understood without clarification for generations, was specified), or compared (illogically) with civil rights for black people.
So today I checked out the Los Angeles Times' coverage of Tuesday's ruling. I was agog at the first sentence of Maura Dolan's report: "The California Supreme Court's decision Tuesday to uphold Proposition 8 and existing same-sex marriages left in place all rights for California's gays and lesbians except access to the label "marriage," but it provided little protection from future ballot measures that could cost gays and other minorities more rights, lawyers and scholars said Tuesday."
The first clause of the sentence was news reporting. The second was pure editorializing. The ruling provides "little protection from future ballot measures that could cost gays and other minorities more rights"??!!! I must calm down.
Under California law, enacted in January, 2005, registered domestic partners in that state have "the same rights, protections, and benefits, and shall be subject to the same responsibilities, obligations and duties under the law...as granted to married spouses." (California Family Code, Section 297-297.5) This was not affected by Proposition 8. How in the world could a professional reporter label the initiative, brought by sincere people with traditional values, as a "ballot measure that cost gays rights"? What "rights" did they lose? Did the court that decided by one vote (4-3) last May that the state's constitution fuzzily implied gays could marry "give rights" that then the mean, cruel homophobes of the state voted to take away? Not really, as couples "married" after the ruling but before Proposition 8 retain even the name.
At issue--and now clarified--is whether two of the same gender in a committed relationship can be recognized according to California law as a "marriage." That's it. There's no "discrimination" or disadvantage to gays except lexiconically.
This is not about hatred or injustice, but that's all you read about in the press--irate gay people and their supporters shouting that they're just the same as the unfairly legally disadvantaged blacks of the early 60s. If that's the case, then why are there no voices from the national black leadership putting their reputations on the line for their gay "brothers?" Could it be because most of the black population is Christian and believes that marriage joins man and woman only? In their campaign, Barack Obama and Joe Biden repeated that they, too, hold that marriage is between one man and one woman.
The lead sentence of Maura Dolan's piece riled me because of its suggestion that those in favor of Proposition 8 are in the midst of some eeeeevil campaign to "cost gays and minorities more rights." It's this sinister painting of anyone loyal to traditional religious perspectives as rampaging to extinguish "rights" of homosexuals that I can't bear. the majority of the population is now defensive; gays and their supporters are the ones on the attack, against the universal understanding of marriage. They no longer claim they want marriage's privileges and responsibilities--California law already guarantees that--they want the word "marriage" because they want official sanction for their sexuality and the gravity of their relationship equal with the man-woman joining that provides the next generati 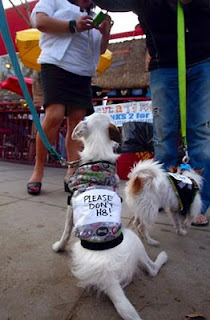 on.
I have gay friends and relatives, and I love and respect them. The people I happen to know recognize their relationships are not identical to traditional marriages; they acknowledge and are comfortable with who they are. If they should commit to a partner and decide to say they're married, I have no problem honoring the way they choose to present themselves, and my caring and regard for them would not change. But it's a different issue when government takes a position, and when the voters of a state express their explicit will regarding that policy.
No one I know who supported Proposition 8 has any hunger for future ballot issues, much less any to "cost gays and minorities more rights." No rights were lost with Proposition 8; biased reporters who snigglingly deride the will of California's majority simply clarify the real source of this issue's antipathy.
Posted by Northern Light at 3:41 PM